Flight to Freedom: Venezuelans in Exile 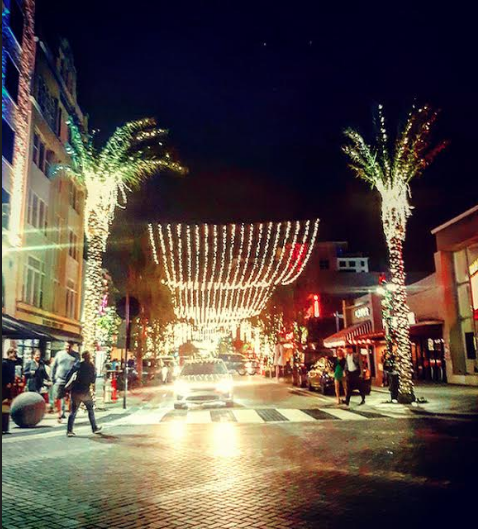 The heat and the humidity enveloped us like a tight embrace, even as dusk deepened. Strings of brightly colored Christmas lights shone hazily through the ocean fog that steadily rolled in from the nearby beach. A strong Caribbean wind whipped the tops of the stately palm trees to and fro. The buzzing of light laughter, animated conversation, the clinking of glasses, and the clatter of silverware seemed to dance on the thick night air.  Strains of music pulsed from every direction.  The distinctive Venezuelan accent could be heard in many of the voices of Spanish-speaking passers-by on the sidewalk, at nearby tables in restaurants, and among my companions—all of whom had recently escaped their home country of Venezuela.

The evening had only just begun.

Sometimes called “Little Venezuela,” West Palm Beach (and other parts of southern Florida) is home to the largest number of Venezuelan ex-pats in the United States.  Many escaped the political tyranny of their homeland for the promise of freedom in America.  A freedom that is arguably best understood and most appreciated by those who know what it is to have lost theirs.

Professionals, students, political activists, and entrepreneurs—my Venezuelan friends—had faced theft, intimidation, expulsion, imprisonment, and worse under Hugo Chávez, and then under Nicolás Maduro’s totalitarian regime.  Once a prosperous nation, today major food, medicine, and fuel shortages have become the status quo—a sad irony in an oil-rich country that once boasted of having the world’s 4th richest GDP per capita—12 times richer than China.

“These American portions are huge.  I can’t finish this,” one said pushing his plate aside.  “We would never get to eat this much food in Venezuela,” another added. “We still aren’t used to it here.”  It was true, the sheer abundance was noticeable even for a well-nourished Canadian like myself, and I could only imagine how overwhelming it must be for new arrivals from one of the world’s most impoverished socialist states.

Stories bounced back and forth like a game of Ping-Pong:

“The soldiers came and took my family’s farm.  We tried to stop them, but we couldn’t do anything about it.”

“They expelled me from medical school for standing up against the regime.”

“I had to hide for months so they wouldn’t arrest me.  My own parents didn’t know where I was.”

Maduro’s forces continually violate Venezuelans’ freedom and human rights while a growing number of citizens have taken a firm stand against the government’s tyranny.

One of my friends, Jorge Andrés Galicia Rodríguez, is one of those fighting for freedom. He came to the United States in October 2018, narrowly escaping capture by the Venezuelan police because of his political activism alongside figures like María Corina Machado, Leopoldo López, and Juan Guaidó. Some of his friends were not so fortunate.

“I haven’t forgotten about Venezuela at all,” he says, though accessing regular—and accurate—updates has become increasingly difficult.  Watching and waiting is frustrating, but Jorge is devoting his time to defending freedom from his new home base in America.

A lawyer in his home country, Jorge is determined to work on behalf of his people from wherever he is—including pushing for temporary protection statuses for Venezuelans.  “I have political asylum because of my governmental activism, but many ordinary Venezuelans don’t have that option, yet their lives are in grave danger because of starvation and other issues.”

Jorge is also passionate about warning America and other nations of the destructive potential of adopting extreme socialist policies: “If it can happen in Venezuela, it can happen anywhere.”

Perhaps he and the others will return home to Venezuela as future leaders when it is safe to do so, but for now, despite our imperfect systems, their voices remind us of how much we have and what we stand to lose should we fail to heed their warning.