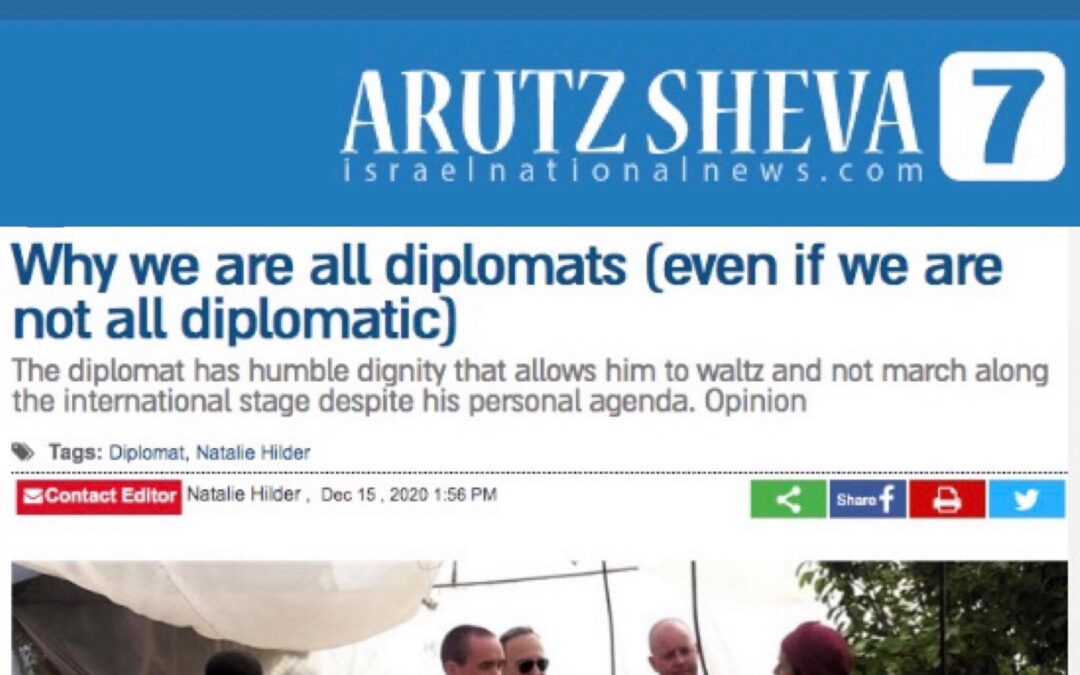 In our globalized world of divisive politics and strained interpersonal relationships, the remedy to animosity must meet both the challenges and the opportunities available to us today.

According to Aristotle, we are all either “political animals” or outcasts that love war and live like a bird that flies alone. But not all political animals are created equal.

Since my political involvement began at age 19, I have met my fair share of politicians, military generals, ambassadors, lobbyists, and stakeholders—with a few heads of state sprinkled into the mix. The ones I have stayed in touch or remained friends with are almost universally the diplomats.

The diplomat is a unique creature—and my personal favourite—one who I believe is the antidote to the lover of war.

A diplomat’s role differs from that of a general or even an “ordinary” politician. Though still maintaining a personal agenda (as we all naturally do), this unique breed of political animal does not march as a soldier or parade as a politician; rather, he or she waltzes across the international stage with a humble dignity that is not for him or herself alone. This is a dance that must include others for it to function at all.

Fostering relationships is integral to the role the diplomat plays; in fact, his or her entire job is dependent upon success in that area. Diverting chaos, preventing wars whenever possible, negotiating peace and trade deals, and representing a collective identity is rarely achieved by force, but through a much more powerful tool: communication.

It is not that a diplomat never makes demands—on the contrary, only that an emphasis is placed upon tact, grace, and fostering human connection to a greater degree than by his or her counterparts.

A diplomat must travel far from his or her home to the land of “the other,” often speaking a new language—both literally and figuratively. Diplomats must find the balance of retaining his or her original identity—representing his or her “tribe” with integrity—while shedding the parts of him or herself that obstruct him or her from fostering genuine relationships with others. In a world where the adage “might makes right” often takes precedence, a diplomat must learn empathic understanding.

Empathy is needed more than ever for all sides of a dispute to find a resolution to their conflict. Whether you happen to represent a nation state at the United Nations or not, we are all diplomats. This is because we all represent one or more ways of thinking and being to those around us, whether they be near or far. The people we engage with may seem somewhat or wholly dissimilar from ourselves, but the reality is that the same people we don’t understand or may disagree with will remain our neighbours (as they should) whether that is comfortable for us or not.

We live in a time where divisions have become even more entrenched around the world, including in America itself. As likeable as diplomats are, it is not as easy job, especially during perilous times. Whether it was the Sultan’s representatives to Vlad the Impaler (whose turbans were nailed to their heads for allegedly refusing to remove them in his presence) or an ambassador friend of mine who was mere steps away from being caught in a terror attack overseas, safety is not always a guarantee.

This same challenge extends to each of us, no matter what profession we are in. Yet, while many of us are caught in the trap of right or left, it is critical to remember that the road to the future is a narrow path that leads only forward. By focusing on our commonalities and seeking to understand our differences, we will have achieved the critical first step to being effective diplomats wherever we may be.

The goal is never to lose who we are—that is assimilation, not diplomacy—rather, it is to seek to understand as a prerequisite to being understood.

We have received our appointments; now let us universally learn to live up to the offices we hold. If we must be animals, political or otherwise, at least, let us be diplomats.