When the Arabs Were Zionists (And May Be Again) 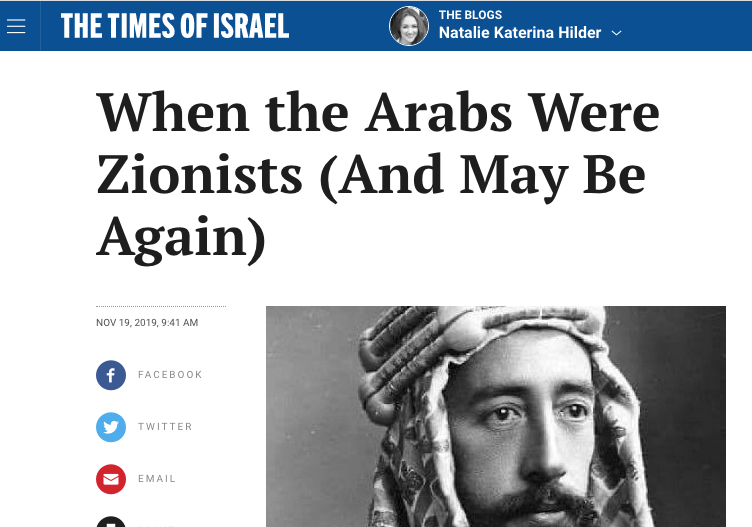 The Arab world has long been characterized (and caricatured) for its rejection of Jewish self-determination (as well as that of other minorities in the region that include but are not limited to the Kurds, Yazidis, Assyrians, and Armenians). While this understanding of expansionist Arab nationalism is certainly not without cause, particularly when considering many of the geopolitical dynamics of the last century, one should note that this has not necessarily always been the case—at least not consistently or universally—and therefore it is logical to conclude that it may not always be the status quo in the future. Long before Zionism became a dirty word, King Faisal I of Iraq wrote to Austrian-American Jewish law professor and Associate Justice of the Supreme Court of the United States, Felix Frankfurter, saying:

“We feel that the Arabs and Jews are cousins in race…We Arabs, especially the educated among us, look with the deepest sympathy on the Zionist movement…we regard them as moderate and proper. We will do our best, in so far as we are concerned, to help them through: we will wish the Jews a most hearty welcome home…We are working together for a reformed and revised Near East, and our two movements complete one another. The Jewish movement is national and not imperialist. Our movement is national and not imperialist, and there is room in Syria for us both. Indeed I think that neither can be a real success without the other.”

Having spent his formative years in the desert outback of the Hejaz region of Saudi Arabia (a tradition for the boys of the ruling Sharif family in Mecca) and later taking on political studies in Istanbul for the ultimate purpose of governing, King Faisal came to have the vision of uniting the Shia and Sunni factions of Islam (at least politically), in Iraq, Syria, and other parts of the fertile crescent. Clearly ahead of his time, his writings indicate that he recognized the importance of fostering a degree of camaraderie between different Middle Eastern ethnic and religious groups—even with those of an entirely different faith, like the Jews.

Despite the emergence of these enlightened views, a counter movement of extremism interrupted the diversification efforts of Faisal’s coterie of kindred spirits. Perhaps one of the most noteworthy undermining efforts was that of the Grand Mufti of Jerusalem, Haj Amin al-Husseini. He had formed an alliance with the Nazis, seeking to emulate Hitler by exporting the Axis’ policies of dealing with “The Jewish Question” to the Middle East. Indeed, he was declared an unalloyed Nazi war criminal at Nuremberg, but fled to Egypt where he was granted asylum.

Though not all of his countrymen shared the Grand Mufti’s views, these ideas did take root, spreading throughout nearby nations to the degree where many adopted these views as their own, and put them into practice. His popularity grew exponentially with the Arab world during WWII, where sympathies with Hitler and his mission to destroy worldwide Jewry were increasingly admired and aspired to. Those who differed lacked the temerity to criticize the Grand Mufti and others publicly, doubtless fearing the backlash that would inevitably have ensued.

When the time for the modern State of Israel to be established neared, the pan-Arab perspective on Zionism was united in its adamant decisiveness against it. The Plenary Meetings of the General Assembly Verbatim Record 16 September—19 November 1947, records Mr. Heykal Pasha (of Egypt) as saying: “The United Nations should not lose sight of the fact that the proposed solution might endanger a million Jews, living in the Muslim countries, if a Jewish state were established, nobody could prevent the slaughters, riots would spread throughout all the Arab states and might lead to a war between the two races.”

This attitude came to be reflected in various legal systems as well as on a social and cultural level. While Baghdad’s penal code was amended to include Zionism alongside Anarchism, Communism, and immorality as forbidden ideologies—all used as a pretext to measures against Jews—vitriolic mobs with a thirst for blood violently attacked Jewish communities all over the Islamic world. This continued with the five-army attack against Israel shortly after its creation as well as the consistent organized terrorist efforts against the Jewish State and Israeli citizens since at least the 1960s.

Despite the spread of ignorant and extremist movements that has led to the exacerbation of terrorism, the widespread demonization of the Jewish State, as well as serious human rights violations against their own people (Arab civilians), change is possible. Indeed, without some shift in mindset and priorities, neither “side” will ultimately be able to enjoy peace and prosperity to the full. Recently human rights lawyer and founder of the Lawfare Project, Brooke Goldstein, questioned Adel al-Jubeir (Saudi diplomat—former Saudi Minister of Foreign Affairs and current Saudi Minister of State for Foreign Affairs) about what he and others are doing to ensure that funding to UNRWA is not going toward terror, ending the production of textbooks that teach and help recruit children for martyrdom, as well as dealing with the hate education that Freedom House and Human Rights Watch reported about Saudi textbooks as well. Adel al-Jubeir stated that they would look at a “restructuring of the operations of UNWRA” so that there would be a focus on the “essential programs” that truly contribute to “the well-being of the Palestinian people.”

He said that he sees “hate speech in Saudi Arabia as a legacy issue” and that there has been a movement over the past 15 years to re-educate on some of these issues while having a “zero tolerance” policy for preaching extremism because that “undercuts our ability to move our country forward and improve the standard of living for our people.” While there are specific cultural and political challenges in Saudi Arabia (they have rightfully been criticized for their human rights violations), there are noises indicating a move in the right direction—the direction of tolerance where non-Arab groups are recognized as legitimate peoples, deserving of pursuing their own self-determination.

Recently another senior Saudi diplomat—who refused to be named at this stage—told the Globes (a Hebrew language paper) that, “The bloody conflict has dragged on for far too long. For us, the Saudis, as well as for all the Gulf States, Egypt and Jordan, it is clear that the age of war with Israel has ended and that normalizing relations will only benefit us. The entire Arab world can benefit from this, not only the Palestinians, and of course also [Israel].” He went on to say that, “History and Allah have brought a real opportunity to realize this” and that those in the Arab world who “hate” Israel should instead view it with “admiration over its success in [technology] and [hope] to copy it.”

Furthermore, in recent times the countries of Egypt and Jordan—formerly bitter enemies of war—have not only signed peace deals with Israel, but during some of Israel’s devastating wildfires earlier this year, Egypt was one of the countries that provided Israel with aid. Bahraini foreign minister Khalid bin Ahmed Al Khalifa also said that, “Israel is a country in a region…there to stay of course” and that “we want better relations with it, and we want peace with it.”

Other than Egypt and Jordan, Bahrain is the only country in the region that has publicly acknowledged Israel’s right to exist, yet Khalifa also said, “we know our brothers in the region do believe in it” too.

While the general Arab consensus has historically taken an anti-Zionist stance, there have also been periods of fluidity—informed by an educated analysis coupled with a desire for collaboration and peace—that point to the possibility of a better future.

The Middle East remains a rough neighbourhood where no one’s hands are free from bloodstains, but that does not mean that a more salubrious age may not begin to dawn in our lifetime, despite the immense challenges we are currently faced with. Granted, tribalism is a definitive aspect of the region, however, a degree of modernity may be achieved through the fostering of education and true critical thinking. As idealistic or even naïve as this vision may seem, it is not entirely out of reach—though the process must be approached with realistic expectations for it to work.

While countries like England are widely esteemed for their tradition of human rights and general sense of fair play (despite not being free from their own list of serious abuses in those same areas), we must remember that the Magna Carta of 1215 has had over 800 years to permeate the hearts and minds of the British. It would be foolish to suggest that other nations who have not been exposed to this near millennia experience of progressive enlightenment will instantly accept its tenets. Approaching this delicate situation with levity would be a grave mistake as these reforms are by no means imminent; however, as vertiginous as this uphill battle is likely to be, we may be privy to witnessing some advances in the not so distant future.

A conscious countermand of specific rhetoric and corresponding policies will be required of Arab and Islamic political and religious leadership alike for any of these grand ideals of peace and mutual prosperity to reach self-actualization—not an easy task—but we have already heard murmurs from powerful individuals in the region that suggest a potential for new ideas to one day take root and flourish.

As disheartening as the current situation may be, it is by no means immutable. Change is possible, though it will not come instantaneously. And it can only come from the inside, as Arabs themselves realize what lies in their best interest. Only then will warring tribes be able to live side by side in peace.