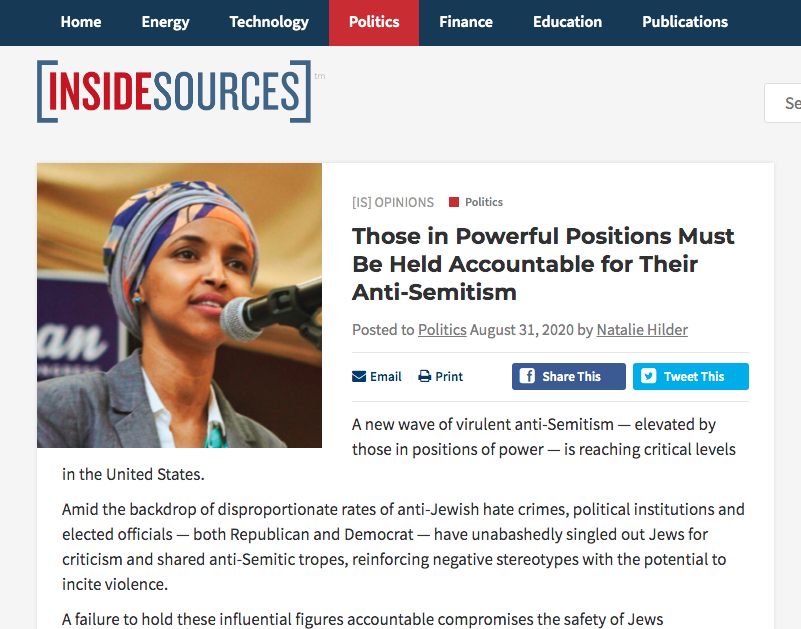 A new wave of virulent anti-Semitism — elevated by those in positions of power — is reaching critical levels in the United States.

Amid the backdrop of disproportionate rates of anti-Jewish hate crimes, political institutions and elected officials — both Republican and Democrat — have unabashedly singled out Jews for criticism and shared anti-Semitic tropes, reinforcing negative stereotypes with the potential to incite violence.

A failure to hold these influential figures accountable compromises the safety of Jews everywhere.

The New York area — once considered a refuge for Jewish immigrants fleeing persecution — has become a hotbed for anti-Semitic hate crimes in recent years.

Last year, a man — who believed Jews were “imposters who inhabit synagogues of Satan” according to his social media posts — shot and killed three inside a Kosher supermarket in Jersey City, New Jersey, just across the river from Manhattan. Two weeks later, a man killed one and wounded five more at a Chanukah party in Monsey, New York. In Brooklyn, Jewish residents have endured assault after assault after assault.

Nationwide, FBI data shows that nearly 60 percent of hate crimes are motivated by anti-Jewish bias (Jews make up less than 3 percent of the United States).

To his credit, New York City Mayor Bill de Blasio did increase the police presence in Jewish neighborhoods last winter following the wave of attacks, and even appointed a “multi ethnic interfaith” group to combat the issue.

But not even a year later, that didn’t stop him from sharing a series of disparaging tweets in which he singled out and blamed the Jewish community for the spread of COVID-19 following a funeral gathering, despite later supporting and attending large protests that violated his own safety standards.

Even the mayor’s own words were cited by assailants who attacked Jews and ripped off their face masks in May.

“You Jews are getting us all sick. The mayor says you Jews are the reason we’re getting sick,” a couple allegedly yelled. And in August, a Long Island man was arrested after threatening to attack a Jewish day school that he alleged was not social distancing.

He said: “If I got to go out there with a freaking machine gun and shoot all these people, I will.” Police later recovered 14 weapons from his home.

Sadly, New York’s mayor is not alone in his complicity.

The Republican Jewish Coalition criticized Marjorie Taylor Greene, the since-nominated GOP congressional candidate also in Georgia for fueling anti-Semitism and conspiracy theories when she called Jewish Democrat donor George Soros a “Nazi” (in addition to her other racist remarks), and for posting a photo of herself with a former Ku Klux Klan leader on social media.

And of course, former New York City Mayor Rudy Giuliani recently made headlines of his own this year when he went on air to promote conspiracy theories about Soros.

Within the progressive wing of the Democratic Party, Congresswoman Ilhan Omar — whose documented past of such rhetoric includes tweets suggesting that Jews are buying political influence and “Israel hypnotized the world” and does “evil,” continues to reach new heights in her disdain for Jews.

And just this past week, the Democratic National Convention hosted Tamika Mallory and Linda Sarsour as speakers, despite their having been dropped from the Women’s March in 2019 over years-long allegations of anti-Semitism. (The Biden campaign later issued a statement distancing itself from Sarsour, but then apologized for the statement during a private briefing with Muslim and Arab activists.)

The seemingly unending trend of those in power unfairly blaming Jews for unrest and bolstering anti-Semitic tropes and attitudes inadvertently filters down into public consciousness, influencing some to act violently as we saw in the New York area not even one year ago, and Miami, Poway, California, and Pittsburgh before that.

If we do not hold these responsible parties accountable for their use of anti-Semitic rhetoric, the rise in anti-Semitic hate crimes will only continue.