The ‘Old-New’ Peace Agreements (And Its Adversaries) 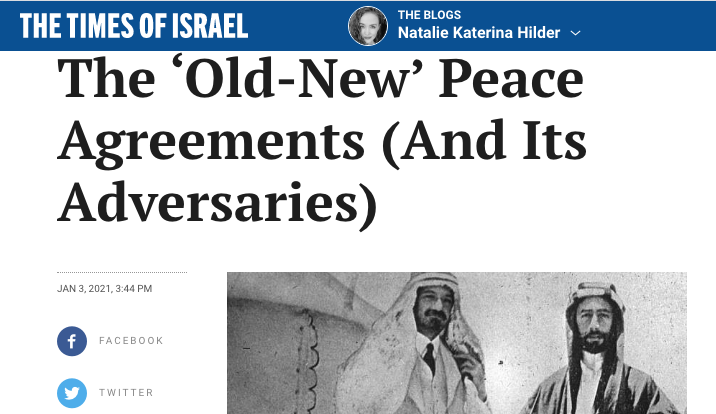 On this day 102 years ago, two visionaries sought to create an Arab-Jewish alliance to combat their mutual enemy of colonialism and to ensure that both Arabs and Jews would collaborate for their reciprocal self-actualization, when they signed the Faisal-Weizmann Agreement on January 3, 1919. While they failed in achieving their goal at the time (for reasons beyond the purview of this analysis), their efforts are, in a sense, being resurrected today.

The ever-shifting sands of Middle Eastern geopolitical alliances are bringing in their wake a new, but not entirely unprecedented, weather front—the deviation of partnerships strictly defined by tribalism and even religion to ones based on mutual self preservation and economic success, which opens the door to what may become the true golden age of the region.

This profound departure from what has been the accepted norm of bitter enmity between Arabs and Jews, demonstrates a rejection of fundamentalism while showing openness to modernity and mutually beneficial economic strategies on a level unseen for over a century, echoing the sentiments of King Faisal of Iraq and Chaim Weizmann.

Just as the leader of modern Zionism, Theodor Herzl, referred to modern day Israel as the “Altneuland,” translated as the “old new land,” so perhaps can the Abraham Accords be thought of as the “old new peace agreements.” Not unlike Faisal and Weizmann’s motivation for allying Arabs and Jews over a century ago, today’s alliances also occurred to combat a mutual threat and to strengthen common economic interests. But, instead of opposing Great Britain’s iron grip on its “oriental” colonies, today the Arabs and the Jews are more concerned about their modern enemies of Iran and Turkey—determined to meet Iranian and Turkish regional intimidation with a strong united economic and military front.

While it is no surprise that Iran condemned the Abraham Accords, Turkey’s criticism was less expected. Despite having already made an official peace agreement with Israel, Turkey vehemently opposed the Arab-Israeli alliance because it threatened to further compromise Turkey’s economics and power politics in the region.

As the Turkish lira hovers along the 13 cents to the US dollar mark and Istanbul’s shiny new $12 billion airport is being virtually unused due to COVID related travel setbacks, it is no secret that Turkey is experiencing dire financial challenges. The recent earthquakes seemed only to have added insult to injury amid fears that the “big one” may come to Istanbul at any time. President Erdoğan may be publicly positioning himself as a strong leader, who incidentally just so happens to be the right man for the job of guiding the Middle East into the future—in an effort to revive Ottoman memories—but this is actually greater evidence of his tendency to sing in the dark rather than a sign of real strength. Erdoğan’s daily desperate search for oil—any oil—continues as his floundering attempts to reverse the currently waning fortunes of Turkey keep falling short of success.

It may seem a cruel twist of fate for the Turks that Israel, Greece, and North African countries have found and are profiting from rich off-shore oil reserves while Turkey, their close neighbour, has yet to discover any.

Turkey’s closest sympathizer at the moment—Iran—though being neither Arab nor Sunni, but a Shia State of Persians, not only shares in Turkey’s grievances with Arab nations, and lack of love for Israel, but also in its dire economic challenges. Years of sanctions have taken a toll on Iran, in addition to the fact that the corrupt leadership has dedicated a huge portion of its national budget to its military, particularly its nuclear program.

But one need look no further than the Arab nations to find that Turkey and Iran have found little sympathy among their Muslim brethren at large. Instead, they have become objects of fear and ridicule—as evidenced by public and private trade agreements as well as by mocking anti-Turkish and anti-Iranian rhetoric coming from prominent UAE, Saudi, and other Arab Twitter users. The majority of the Sunni world has turned against Sunni Turkey in favour of the entirely non-Muslim Jewish State, while Shia Iran has aligned itself with Sunni Turkey both economically and militarily.

Notwithstanding Turkish and Iranian economic weaknesses, it would be a mistake to extrapolate from that that these nations are non-threats to their neighbours. On the contrary, both Turkey and Iran continue to hurl intimidating rhetoric while exhibiting military aggression toward nearby countries. Their troubles don’t preclude but rather make them ripe for retaliation against the signees of the Abraham Accords, even before the ink dried. Turkey is now talking out of both sides of its mouth with its local media contradicting the narrative of reconciliation pushed by its foreign connections.

According to T4 Turkish media, one commentator said that Turkish forces could “enter Tel Aviv in 48 hours” and that “we are not like the Arabs,” seemingly referencing the failed Arab invasions of the 20th century. While Erdoğan has been laying on the charm thick of late—with talk of re-appointing a Turkish ambassador to Israel—we would do well to remember his continued funding of terror and proxy wars, the Turkish TV programs that promote antisemitic and extremist themes, and his own office’s promises to “liberate Al-Aqsa,” saying that, “Jerusalem is ours.” The contrast between Turkey and the Arab signees of the Abraham Accords could not be more obvious.

While the idea of a not-so-distant Middle Eastern renaissance may be too sweet for the palates of most global realists, it is clear that two of the most infamous enemies—the Arabs and the Jews—have successfully rejected the status quo for the sake of their mutual greater good.