The Abraham Accords: The Reconciliation of Arabs and Jews 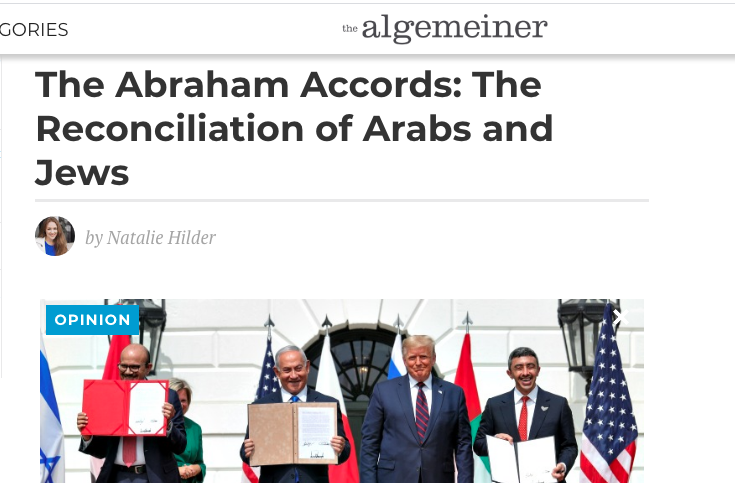 Hope — long deferred — materialized on the South Lawn of the White House on September 15, when leaders from the UAE, Bahrain, and Israel officially normalized relations. The Arab nations publicly recognized Israel’s right to exist, and all concerned parties affirmed their joint plans to work together for peace and prosperity from that point forward.

The rapt applause of the hundreds of attendees echoed that of the millions more supporters worldwide. This historic treaties established unprecedented economic and diplomatic ties that will include opening embassies, commencing commercial air travel and tourism and instituting mutual economic and other cooperation.

Aptly named the Abraham Accords, this is not merely a truce between warring nations; rather, it is the longed-for reconciliation between estranged members of the same family.

A 4,000-year-old sibling rivalry originated in the tents of Abraham, when a rift over inheritance divided two sons of the same father. Since then, Ishmael and Isaac have lived at enmity — a historic animosity that made the fact that Arabs and Jews have more commonalities than differences seem ironic to many.

Besides their genetic ties, Arabs and Jews have similarities in language (sharing many of the same words), culture, and faith. Themes of peace — though often more elusive than actualized — are woven throughout the blueprints of Jewish and Islamic consciousness.

During the signing ceremony, Prime Minister Netanyahu quoted the Psalms, saying, “May God give strength to His people; May God bless His people with peace,” while Sheikh Abdullah of the UAE quoted the Hadith, saying, “O God, you are Peace and from you comes peace.”

Consider: despite their fractured relationship, Ishmael and Isaac reunited after Abraham’s death to bury their father together. Their story is one of loss but also of restoration — and of unique and shared blessing — an enigmatic bond that continues today.

Recently, Arab voices have begun to say out loud that they were wrong about Israel and Jews being their enemy. Media headlines from Saudi Arabia and nearby countries praising the Abraham Accords frequently repeat the words: “salaam,” “shalom,” and “peace.” Online videos showing Emiratis (and others) wishing Israelis well often featured newly created filters of the Israeli, UAE, and Bahraini flags, while others depict both adults and children singing and dancing to Jewish songs. Gulf-accented greetings of “Shana Tova” and “Chag Sameach” are flooding Facebook timelines during the Jewish holidays. Some have even gone as far as to ask for forgiveness.

The idea that Arabs and Jews are inherently enemies is false. In fact, nothing could be farther from the truth. They are a family. Imperfect and dysfunctional? Yes. But then, who isn’t?

Arabs and Jews are soul mates in the sense that they have a shared past and an inextricably linked destiny. Fated to live side by side, it is impossible to ever divorce the two.

The Bible, the Koran, and historical evidence affirm that Arabs and Jews have dwelled together for millennia. Moving forward, it will be incumbent on these cousins to further solidify peace by protecting and celebrating overlapping Arab and Jewish heritage — particularly through greater acknowledgement of and devotion of resources to preserving and showcasing important historical sites and artifacts in their respective countries.

Despite ongoing challenges, rejection, resentment, and rage are being replaced with a reunion — which is truly better late than never.

And as for our beloved father Abraham? It is perhaps his prayers more than anyone else’s that are being answered today.