Reviving the Faisal-Weizmann hopes for peace after 100 years 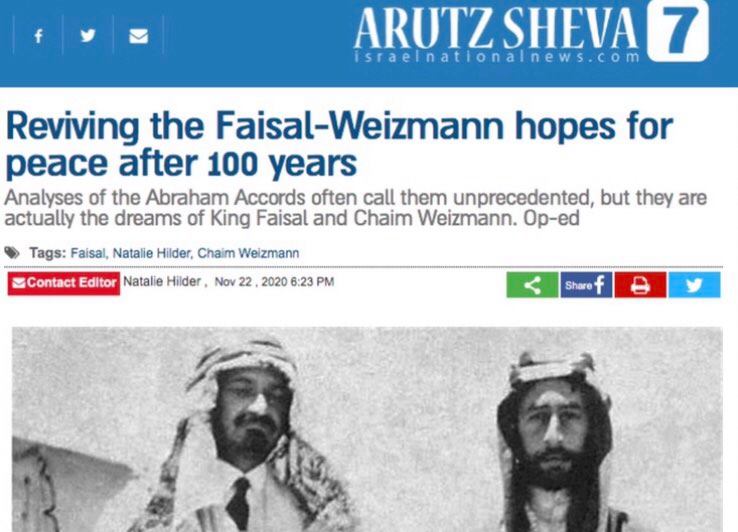 The emergence of the Abraham Accords was met with global astonishment—and jubilation, for the most part—but did this seemingly unprecedented peace agreement actually materialize much later than it could have?

Perhaps it was the necropolis of unsuccessful Western attempts at fostering reconciliation between Arabs and Jews in a region which permeated so much of global consciousness and where mistaken beliefs about everything from the conflict to the culture took precedence over reality. Additional failures further intimidated political players into accepting the status quo rather than looking deeper for a solution. These failed efforts were erroneously dismissed as either the futility of trying to resolve impossible tribal divisions in a particularly unreasonable part of the world, or as the inevitable loss of balance that those out of their element would almost certainly experience when attempting to straddle the occident and the orient.

While never without complexity, a viable Arab-Jewish peace agreement nearly materialized over a century ago when innovators from both sides decided to unite against imperialism together, supporting each other’s respective indigenous liberation movements.

On January 3, 1919, Chaim Weizmann, a renowned biochemist and the President of the World Zionist Organization, met with King Faisal of Iraq, the son of Sherif Hussein of Mecca, to sign a joint Arab-Jewish peace agreement. Their intention was to escape the clutches of colonial rule and to flourish side by side as independent, but complimentary states, acknowledging each other’s right to exist and furthering each other’s mutual development in the spirit of brotherhood.

Sherif Hussein of Mecca acknowledged the Jewish people’s right to their ancestral home as well as his desire for the Jews to work with the Arabs in developing the future Arab States, when he boldly wrote, “The resources of the country [modern Israel] are still virgin soil and will be developed by the Jewish immigrants. One of the most amazing things until this time is that the Palestinian used to leave his country wondering over at high season every direction, his native soil could not retain a hold of him (sic), at the same time we have seen the Jews from foreign countries streaming to Palestine from Russia, Germany, Austria, Spain, and America, the cause of causes could not escape those who had gift of deeper insight, they knew that the country was for its original sons, for all their differences a sacred and beloved homeland. The return of these exiles to their homeland will prove materially and spiritually an experimental school for their brethren who are with them in the fields, factories, trades, and things connected to the land.”

While many European leaders were more reticent about Jewish self-determination, the Arab leaders of Mecca and Medina openly acknowledged Israel as the eternal homeland of the Jewish people, encouraging those in the diaspora to return, and expressing their desire for the Jews to help them build up their future countries—as both the Arabs and the Jews were forging futures for themselves in what they saw as a post-colonial world. The Faisal-Weizmann peace agreement reflected these ideals, stating that it would honour the Balfour declaration.

Both the King of Iraq and Mr. Weizmann broached the idea of a holistic and warm Arab-Jewish alliance with surprising alacrity—at least when viewed through the less than rosy glasses of today. Unlike the latter part of the 20th century and into the 21st century, Arab-Jewish relations were generally positive in those days. Not only did the Arabs want peace with the Jews, Zionism was considered the farthest thing from a dirty word. Rather, it was an ideal shared by many of the Arabs themselves.

It was arguably the Europeans who were the most suspicious of Zionism, not necessarily those in the Middle East—with the exception of the Turks, who did not want independence for the Jews or for the Arabs. Neither the Arabs nor the Jews viewed each other as aggressors or colonialists—both were endeavouring to establish respective independent Arab and Jewish States, the success of which was only precluded by the imperialist stronghold of the British Empire, and the Ottoman Empire prior. Unfortunately, the fullfillment of their high hopes of a mutually beneficial and long-lasting confluence of the children of Abraham would be delayed for over a century.

While both Chaim Weizmann and Prince Faisal signed their agreement in good faith, optimistic that a prosperous and independent future was within reach for them both, some large obstacles still stood between them and their realized dreams. The Arabs knew that the promises of the British at that time were often worth less than the paper they were written on, so King Faisal added an important stipulation. The agreement was printed in English, but hand-written in Arabic next to his signature—to ensure that Arab interests would be protected, should the British go back on their word—Faisal wrote, “Provided the Arabs obtain their independence as demanded in my [forthcoming] Memorandum dated the 4th of January, 1919, to the Foreign Office of the Government of Great Britain, I shall concur in the above articles. But if the slightest modification or departure were to be made [sc. in relation to the demands in the Memorandum], I shall not then be bound by a single word of the present Agreement which shall be deemed void and of no account or validity, and I shall not be answerable in any way whatsoever.”

King Faisal and the Arab leaders wanted peace with the future State of Israel, but not at the expense of their national interests. The success of this agreement depended upon Britain’s fullfillment of its wartime promises to the Arabs, ensuring that their nations would then operate as Arab States. Tragically, but not unanticipated, these early peace efforts were thwarted—not because the Arabs and the Jews were against peace, but because Britain rescinded its promise to the Arabs (as it did not want to give up its control over the Middle East), and the Arabs withdrew from the agreement as a result. Additionally, Britain severely limited Jewish immigration to Palestine during a time when millions of Jews were being gassed and incinerated in Hitler’s ovens. It would take a century to begin to truly repair this broken Arab-Jewish relationship, thus returning to the aspirations of Faisal and Weizmann.

Joint Arab-Jewish aspirations, among other variables, did not just disappear. This is why peace is as possible today as it was 100 years ago. Analyses of the Abraham Accords often describe them as an unprecedented development when they are actually the dormant dreams of King Faisal and Chaim Weizmann, roused from their century-long coma, finally coming to fruition. Ironically, some of the main criticism of the Abraham Accords—other than Iran and the Palestinian leadership—comes from Turkey and European nations—those whose pasts are fraught with imperialism, some of whom played a significant role in delaying this same peace process until now.

It is difficult not to consider how different the world would be today—the fates of millions altered—had the leaders of 100 years ago acted differently. Today it is more important than ever for Western nations like America and Great Britain, to exact policies that support peace so that it can flourish, while Middle Eastern nations must put the past behind them and take responsibility for the present, so that there will be a future.

We cannot be satisfied with things as they are, despite the recent victories. We must work to ensure that momentum is not lost so that more Arab States join the Abraham Accords and that a viable solution is enacted for the Palestinian Arabs as well. Even though peace was delayed, it is certainly better late than never.