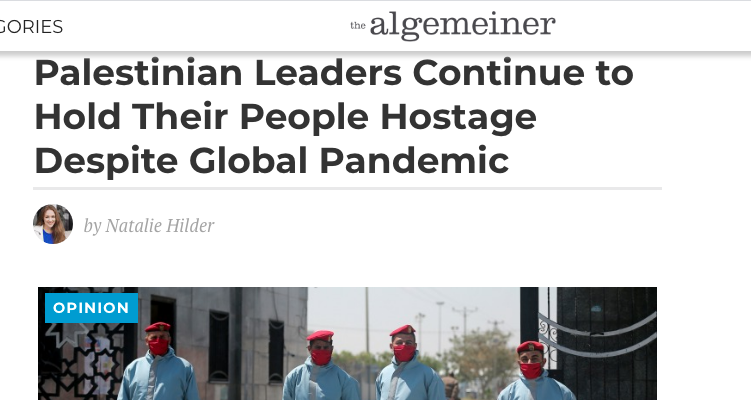 Despite COVID-19, Palestinian leaders keep neglecting and abusing their own people in favor of their agitprop and anti-Israel incitement. Hamas arbitrarily detains journalists and peace activists, and tortures and kills its citizens, while the Palestinian Authority (PA) — whose leader is in his 16th year of a 4-year term — is closer to democracy by a small margin.

Peace activist Rami Aman’s arrest on April 9 for “treason” by Hamas for his Zoom call with Israeli peace activists is a jarring and widely publicized drop in the bucket of Hamas’ crimes against humanity. An Amnesty International freelancer, Hind Khoudary, informed senior Hamas officials of Rami’s activities, but just as troubling is Amnesty’s paltry condemnation of this act and Hamas’ countless crimes and incitement.

Amid a robust international campaign, Amnesty International denounced Khoudary and declared Rami Aman a prisoner of conscience, calling for his immediate and unconditional release. But Amnesty has yet to campaign for Aman as they have done for Palestinian prisoners like Ahed Tamimi, as well as others who have been involved in terrorism.

Human Rights Watch refers to the Palestinian Authority as a “police state,” and has detailed “more than two dozen cases of people detained [and tortured] for no clear reason beyond writing a critical article or Facebook post or belonging to the wrong student group or political movement.” Despite having ratified all the major international human rights treaties, the Palestinian Authority has not abided by them.

Instead of seeking solutions, Palestinian leaders present Israel as an enemy, not a potential peace partner — a narrative that encourages those like Khoudary to decry normalization with Israel, even if it means endangering other Palestinians. Palestinian leadership on both sides also teaches their children that it’s glorious to kill and murder Jews, and their school curricula is rife with incitement.

Whether it is Hamas’ claims that COVID-19 positive workers are being smuggled through the drainage system to Gaza, that Jews are intentionally spitting in public, or that IDF soldiers are spreading the virus through the door handles of cars — all with the intention of killing Palestinians — this dissemination of hyperbole and outright lies is an attempt to induce an amygdalin response in Palestinian civilians.

Despite the thousands of tons of medical supplies arriving for Palestinians from Israel on a weekly basis, normalization is seen as a capital crime, at least publicly. Kamal Musa, Hamas’ Ministry of Health spokesperson, recently deleted his Facebook posts regarding Israeli medical teams training Palestinian doctors in the West Bank, as well as training Gazan doctors at a military base near the Erez crossing. Rather than taking this opportunity of increased Israeli-Palestinian cooperation during the pandemic as a foundation to build upon toward peace, the Palestinian leadership undermines it.

Yet for all of their protests against “normalization” with Israel, Hamas accepts Israeli aid, receives training from Israeli doctors, and sends its leaderships’ family members to Israel for medical assistance — while blocking ordinary Gazans from doing so. Last Thursday — in another protest against Arab normalization with Israel — the PA refused 16 tons of humanitarian aid intended for Palestinians because it arrived on the first direct commercial flight from the United Arab Emirates (UAE) to Israel. Palestinian civilians have become pawns of their corrupt leadership.

Human Rights Watch has said, “The systemic practice of torture by Palestinian authorities may amount to a crime against humanity prosecutable at the International Criminal Court (ICC).”  The Palestinian leadership’s duplicity has already been exposed; all that is left is for the international community to finally hold Hamas and the PA to account.