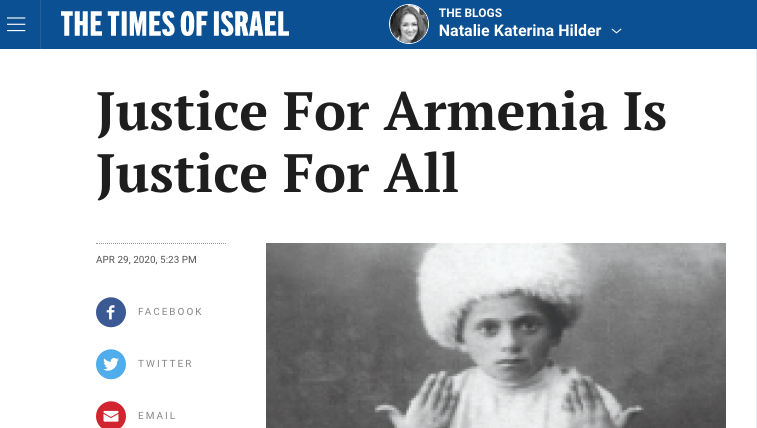 Justice delayed is justice denied, but sometimes it is better late than never. The 105th anniversary of the inadequately acknowledged Armenian Genocide is a stark reminder of one of humanity’s most deplorable mass murders as well as the international community’s failure to act in defence of the victims. Despite being second only to the Holocaust in terms of its research and analysis, it has rarely—and only lately—begun to even be acknowledged by the powers that be, never mind meaningfully serving justice.

In 1915, Turkey and its neighbouring regions in the Ottoman Empire began the systemic arrests and expulsion of its Armenian citizens. The genocide of over 1.5 million—which continued from then until after WWI—included the forced labour and killing of fit and healthy males. When not immediately massacred, women, children, the sick, and the elderly were forced by their army escorts to go on long death marches into the Syrian Desert. These brutal journeys deprived their victims of food and water, exposing them to incidents of theft, violent rape, and murder.

After the war had ended, some efforts were made by way of the Treaty of Sèvres to prosecute the Ottoman Empire’s war criminals. But the intended sequences of courts martial failed due to political pressure and a lack of a suitable legal structure by which to regulate such war crimes. In fact, not only did all attempts at establishing international tribunals collapse, but also the architects of the genocide were able to roam freely throughout Europe and the Middle East, evading responsibility.

The American Congress’ official recognition of the Armenian genocide was the exception rather than the rule on the international stage, and Turkey has yet to admit responsibility or to be held to account by other States for their reprehensible crimes against their Armenian population.

If we ultimately want the values of freedom, equality, and justice to be taken seriously, we must find a way to ensure that those guilty of crimes against humanity do not escape blame.

Our inaction is not only an insult to the memory of the dead millions by our failure to bring their murderers to justice, but our misdeeds of omission serve as encouragement to present and future regimes with an interest in attempting comparable offences. Failing to act does not just deny justice to the victims; it also misses the critical opportunity of deterring future criminals from committing similar atrocities.

Elie Wiesel famously wrote, “We must take sides. Neutrality helps the oppressor, never the victim. Silence encourages the tormentor, never the tormented. Sometimes we must interfere. When human lives are endangered, when human dignity is in jeopardy, national borders and sensitivities become irrelevant. Wherever men and women are persecuted because of their race, religion, or political views, that place must – at that moment – become the center of the universe.”

“Never again” does not mean that no one will ever try to commit genocide again. It means that we will do everything in our power to prevent it from happening, to stop it in its tracks, and to hold the perpetrators of such heinous acts to account.