Iran’s Prisoners of Conscience Bear the Brunt of COVID-19 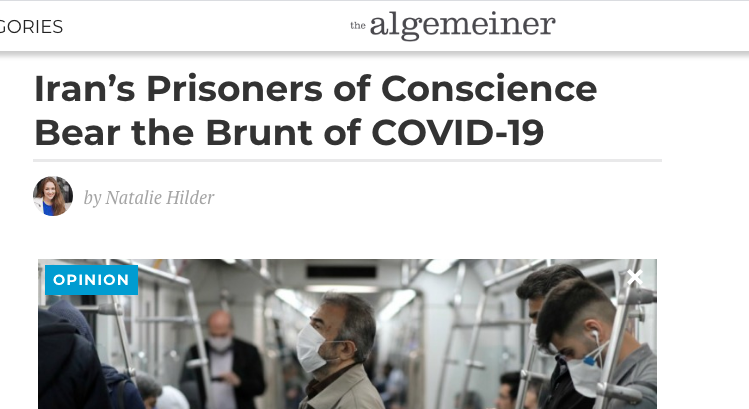 Despite Iran being severely hit by the coronavirus — with a death toll likely much higher than officially reported — the country’s use of subterfuge and contempt for due process has made its prisoners of conscience its most vulnerable citizens.

Notorious for their vituperative abuse of prisoners –with prolonged interrogations that include psychological, physical, and sexual abuse — Iran’s medically ill-equipped penitentiaries are also cesspools for disease. And those prisons are teeming with political prisoners, especially after November’s uprising when the Islamic Revolutionary Guard Corps murdered scores of unarmed protesters and arrested many thousands more.

Iran has recently clamped down on defense attorneys like Nasrin Sotoudeh, who defended political prisoners protesting things like the compulsory hijab. She became a prisoner herself when her work for justice was criminalized by the regime. Having been jailed before, her seven new charges include “corruption and prostitution” and “insulting the supreme leader.” Her new sentence — which was laid in absentia when she refused to attend the trial because she was unable to choose her own counsel — is 33 years and 148 lashes.

Payam Derafshan, another well-known human rights lawyer who defended high-profile political prisoners and publicly challenged a judicial ban on Telegram — a widely-used messaging app — was denied access to his legal counsel and found guilty of “insulting the supreme leader.” He was sentenced to two years imprisonment with an additional two-year suspension from practicing law.

The Iranian Bar Association repeatedly suffers threats and intimidation intended to stifle its efforts to protect lawyers in Iran. On May 5, 180 former Iranian judges published an open letter calling on the Judiciary Chief, Ebrahim Raisi, to stop the judiciary’s “illegal interference” in the bar association’s affairs.

Perhaps even more despised than Iran’s political prisoners are its religious prisoners. Seen as enemies of the state, non-Islamic citizens are routinely tortured in prison for their faith. The government largely refuses to show clemency to Christian converts in particular. Despite having given temporary leaves of absence to other groups, virtually no prisoners released due to COVID-19 are Christians.

Yousef Nadarkhani, a Christian convert and pastor born into a Muslim family, was detained and charged with “apostasy” and “evangelism,” and accused of “Zionism.” Having suffered years of harassment, repeated arrests, home raids, beatings, and attacks on his family members, he was sentenced to 10 years. He is currently incarcerated in Evin prison with other members of his congregation who were also denied temporary release.

Marjan Greenblatt, the founder and director of Alliance for Rights of All Minorities, said that despite Iran’s recognition of Christians as an official religious minority with second-class legal rights, “converts out of Islam have no rights” and Christian converts “actually risk their lives for their religious beliefs.”

The international community must invoke the Universal Declaration of Human Rights, push for due process in Iran, and demand the immediate and unconditional release of prisoners of conscience.