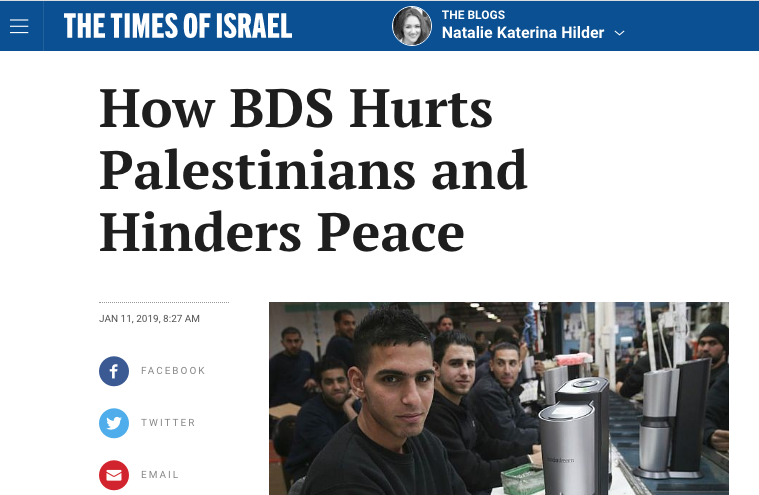 Believed by many to be a crusade that espouses human rights—particularly Palestinian rights—can the Boycott, Divestment, and Sanctions movement provide the solutions it promises, were its demands to be met? BDS claims to be working to better the lives of the Palestinian people. They say that Israel is an illegitimate apartheid State that is to blame for all of the woes of Arabs in the region, but what are the real reasons for the majority of the challenges that Palestinians face, and does BDS provide a viable answer for any of them?

In actuality, BDS hurts the very people it professes to help, while contributing to stalling the peace process in the same breath. While BDS can (and does) target any Israeli company (including those working in Israel proper), it has focused on Israeli-owned companies that operate in the disputed territories of Judea and Samaria/the West Bank with a greater vengeance.

When BDS aimed their campaign against SodaStream in 2015, the company closed down their primary manufacturing plant in Ma‘ale Adumim (in the West Bank), due to the international pressure it received. SodaStream then moved its operational headquarters to Lehavim (in Southern Israel), where it was recently sold for $3.2 billion and it continues to prosper as a company, employing both Jewish and Arab Israeli workers. This untimely boycott hurt Israel far less than it did the over 500 Palestinian workers that SodaStream was forced to lay off as a result—employees who worked to support their families in good job conditions with a competitive wage had to start from scratch due to a movement that supposedly has Palestinian best interests at heart.

The sad irony is that Israeli companies not only employ both Jews and Arabs, which facilitates a peaceful working environment, contributing to the greater peace process at a grassroots level, but they also provide Palestinian employees in the West Bank with much higher wages than they would otherwise receive. This is particularly valuable for those living in the West Bank because their earnings can go much further due to the smaller economy/lower cost of living in the region. A single job in an Israeli company often goes toward supporting an entire Palestinian family, which creates a tremendous ripple effect for the overall prosperity and well-being of the society. Any company that has relocated from the West Bank to Israel results in the loss of Palestinian jobs—jobs that are then filled by Israelis. This has not hurt Israelis or the Israeli economy in a significant way; however, BDS does do a great disservice to the Palestinians whose goal it is to live a life of dignity while supporting their loved ones because it impairs the ability of these Israeli companies to operate there.

Other Israeli factories and businesses continue to operate in the West Bank, providing a livelihood for thousands of Palestinians. Avi Zimmerman, the Chairman of Judea & Samaria Chamber of Commerce & Industry stated that roughly 30 000 Palestinians in the region are employed by Israeli companies, with $300 million going directly to Palestinian salaries alone every year, and by default into the Palestinian economy. Other companies not only provide competitive wages for their workers, but also pay for schooling and medical expenses of employees and their family members. While providing these wages and employee benefits is not unusual for Israeli companies operating in the region, this not the status quo practice in the West Bank—meaning that if these businesses were ousted, these same workers would be paid a small fraction of their current wage at a different job—if they were able to find a new job at all.

Despite this reality, in 2017, the United Nations Council of Human Rights—under the direction of Prince Zeid Ra’ad Al Hussein, Jordanian Diplomat and now former U.N. High Commissioner for Human Rights—went against the principles of corporate social responsibility by sending letters to approximately 150 multinational corporations, warning them not to do business with Israel on the premise that Israeli-owned businesses operating in Judea and Samaria is an abuse of human rights.

While BDS activists falsely claim that Israel and Israeli companies are not treating their Palestinian employees well, the opposite is true. ARISE (Alliance to Reinforce Israel’s Economy & Security), founded by human rights lawyer Calev Myers, recently contracted an expert Corporate Social Responsibility company (Maala – Business for Social Responsibility) to conduct an independent study on Israel’s Corporate Social Responsibility standards. This study was based on a stringent grid set by the United Nations and other international standards of good practice. Their findings show that Israel actually ranks high on the list of nations acting with integrity on issues of Corporate Social Responsibility—making it the most advanced country in the Middle East, as well as having a high ranking on a global scale. In other words, it is not only socially responsible to invest in Israel, it actually contributes to the advancement of human rights, further proving that those in favour of boycotting Israel are not doing so because of a humanitarian ideal.

As with any problem, it can only be resolved when the root cause(s) are identified and dealt with. Misplacing blame does not yield results in general, nor will it here. The BDS movement blames Israel for the lack of a Palestinian State, the smaller Palestinian economy, and Arab suffering in general, but the reality is that the Palestinian leadership is largely responsible for each of these things and more.

Firstly, the Palestinian leadership has an all-or-nothing approach toward statehood—either all of Israel is annexed to form a Palestinian State or no deal will be made. Israel has offered the Palestinians a state on several occasions—including the majority of the West Bank with East Jerusalem as its capital, but all offers were always refused. A baffled President Clinton blamed the Palestinian leadership entirely for the failure of the peace process at Camp David. It is this uncompromising and toxic “from the river to the sea” mentality—which calls for the destruction of the Jewish State and her people—that is hurting ordinary Palestinians’ prospects in the process.

Secondly, the Palestinians have received billions in foreign aid—25 times the funds that Europe was given to rebuild after World War II. This raises the question: where has the money gone? Sadly much of it has gone into the private purses of the leadership as well as to fund terror. When Yasser Arafat died it was discovered that he had over $1 billion in foreign investments—money taken from organizations like UNRWA. Other resources that were supposed to be allocated for hospitals, schools, and general infrastructure went to fund terror organizations, purchase weapons, and dig terror tunnels.

Thirdly, the Palestinian leadership abuses its own people. Despite the fact that they are supposed to hold elections every four years—the Palestinian leadership has not had an election since 2006, making this the 15th year of Mahmoud Abbas’s presidency. Nor is the Palestinian leadership above executing or sentencing their own people to lifelong imprisonment for the crime of selling their home to a Jew, while providing terrorists (and their families) who murder Jews with a lifelong pension. Torturing their own citizens (even children) to force confessions in retribution for anything that might be construed as disloyal, using people as human shields to gain international sympathy, and general intimidation is commonplace. Bethlehem’s 86% Christian population has been reduced to 12% or less due to these horrific occurrences. Giving greater power to this tyrannical leadership will not help Palestinian people; it will only worsen their plight. Gaza is a classic example of this sad reality.

Empowering the Palestinian people is an admirable and worthy goal that should be pursued by freedom-loving people everywhere. Being Pro-Israel and Pro-Palestinian does not have to be mutually exclusive. To do so one must get to the root of the issue, which involves bravely taking the true perpetrators to task (a very unpopular approach to take in our present political climate) rather than reproaching Israel for a problem they have little control over.

If you actually want to help Palestinians, then start by getting to the root of the issue causing the suffering rather than scapegoating Israel. As much as the latter hurts Israel, it ultimately hurts Palestinian civilians even more.

The truth is that BDS does not help Palestinians; it just fights against Israel.