Venezuela: The Tide is Turning 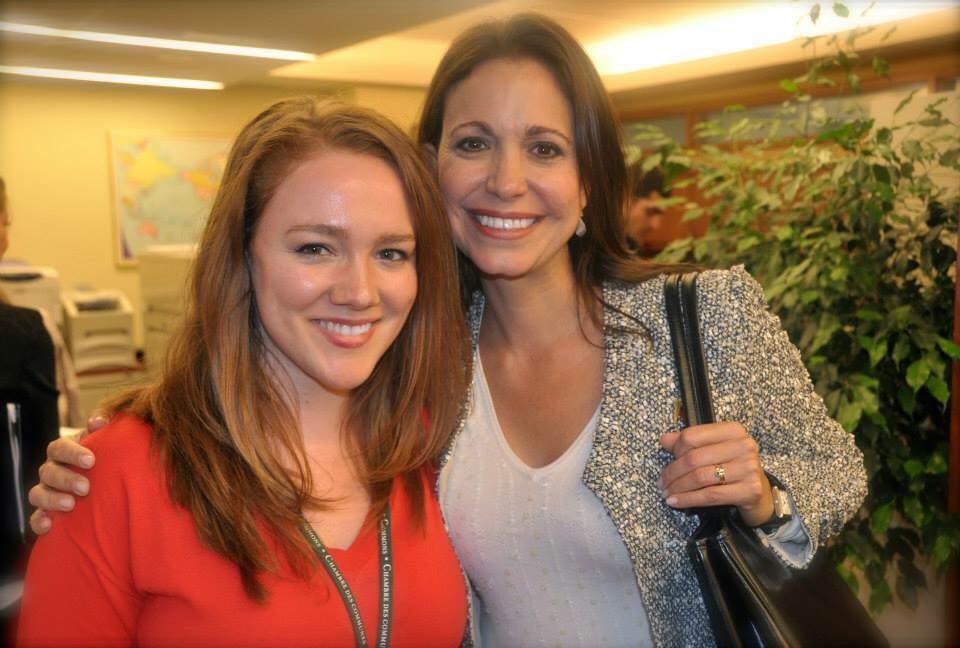 While the world watches with bated breath, Venezuelans are taking their country back from the grip of tyranny. Or at least trying to.

Just as the people of East Germany and other nations resisted and overthrew the despotic Soviet empire, thousands of Venezuelans have taken to the streets, demanding their freedom from the years long Bolivarian socialist hell.

Like most, my knowledge of Venezuela was limited to that of video clips and news articles for some time. But in spring 2014 the disarming Maria Corina Machado walked into my Ottawa office (I was a political staffer at the time) during her brief visit to Canada’s capital.

A beloved Venezuelan politician from the official opposition, she had stood up for freedom and prosperity in her nation.

Simply for exposing the government’s crimes and standing up to its toxic leadership, they were thus viewed as a threat to its monopoly on power.

Her unlawful imprisonment by President Maduro (who had taken over Venezuela after the death of his similarly oppressive colleague and predecessor, Hugo Chávez) some short months later brought a new sense of gravity to the severity of Venezuela’s descent into totalitarianism.

Some of her closest colleagues like Leopoldo López also faced jail for false charges—simply for exposing the government’s crimes and standing up to its toxic leadership. They were thus viewed as a threat to its monopoly on power.

Before this political dogma had reached self-actualization, 19th century poet and political philosopher Heinrich Heine said that “communism possesses a language which every people can understand—its elements are envy, hunger, and death.”  His foresight has been proven accurate in every place where extremist leftist ideals have been allowed to flourish, and Venezuela is no exception.

Just as other nations experienced comparable crises when parties with similar values took control, the United Socialist Party of Venezuela’s implementation of its radical ideology was the greatest calamity to happen to this once flourishing country.

Once revered by some, the despotic Venezuelan leadership has caused this proud nation to devolve into a place of want, fear, and desperation. Hardly recognizable in its present condition compared to its former glories, Venezuela has become a textbook example of a tolerable government gone horribly wrong.

Formerly the largest economy in South America and the sixth largest member of OPEC in oil production, Venezuela has regressed to the standards of some of the poorest, most oppressed, and most dangerous developing nations in the world in a matter of mere decades.

Venezuela is not only rich in natural resources like oil, but it has the highest number of proven oil reserves in the world. These inherent advantages should be resulting in a thriving economy, not in Venezuelans having to acquire gasoline illegally because they cannot access it in their own country. This is a nation on the brink of ruin.

Its putrefied political system has, over time, led to the practice of insiders being appointed to positions of power, essentially barricading the government against outsiders who could play a meaningful role. As a result Venezuela has come to be known as a place governed by and through tyranny instead of the vibrant democracy it could be. This dictatorship has stifled all aspects of healthy political discourse, including freedom of speech/expression, free markets, and free elections. Freedom was the first victim in this, but it has led to numerous other grievances as a by-product of this assault on freedom.

With an inflation rate that surpassed 1 million per cent (expected to reach the 10 million mark next year), Venezuela’s people have been plunged into the depths of poverty. When a single apple costs 5 per cent or more of a worker’s monthly salary, it is not hard to see why the term the “Maduro diet” has caught on.

The average Venezuelan has lost 19 pounds over the last year due to food shortages—this includes professionals. Missing work to queue up for hours in government subsidized food lines is no guarantee of finding food as many Venezuelans still return home empty-handed. Parents are forced to go to great lengths to ensure that their growing children have adequate nutrition, but often come up short despite their best efforts. Basic services have ceased to function and medications including antibiotics have become unavailable so even contracting a simple infection could be deadly.

The current situation has deteriorated to the point where intimidation, kidnapping, murders, and violence toward Venezuelans as well as foreigners have become an everyday occurrence.

In addition to the financial collapse of Venezuela, human rights violations abound. Venezuelans have been arbitrarily detained (without access to lawyers for extended periods of time), tortured, and even killed for years, and they continue to live in daily fear of government reprisals.

In the absence of any real evidence, something as simple as being in possession of the opposition’s political materials (like a pamphlet) could result in jail time. A bevy of international human rights organizations have criticized Maduro’s regime for these abuses, yet they persist.

The current situation has deteriorated to the point where intimidation, kidnapping, murders, and violence toward Venezuelans as well as foreigners have become an everyday occurrence. The secret police has participated in killing their own citizens, and people are aware of places in Caracas where bodies are regularly dumped.

Groups of Colectivos—paramilitary vigilante groups not directly tied to the army, often comprised of convicted criminals given their freedom in exchange for serving Maduro’s government—have essentially become death squads. Foreign journalists have been assaulted and dragged out of their hotels—no one is safe. It is no wonder that millions of Venezuelans have fled their homeland on foot in search of a safe haven.

Venezuela’s questionable foreign alliances further solidify its own destructive trajectory while contributing to the strengthening of various dictatorial regimes around the world, resulting in greater international instability. It has often been said that a person is the average of the five people he or she spends the most time with. While this idea usually refers to individuals, the same logic can potentially be applied to nation states as well—at least it seems to work in the case of Venezuela.

Closely allied in friendship (and emulating) with former and current governments in nations like Libya, Syria, Iran, Cuba, and Russia (all guilty of condoning and committing grievous human rights violations), Venezuela’s poor choice in friends not only makes the regime’s values clear, transparently showing what sort of tyrannical operation they are really running, but it also serves as a guidepost that points to a similar destructive end, should Venezuela not turn from its present course.

Despite these tremendous challenges, the proverbial tide is turning. Enter stage right, Juan Guaidó; the leader of the Popular Will party (with a centrist social-democratic stance), recognized as the acting President of Venezuela by 54 governments, and the antidote to Maduro’s cloven hoof.

The President of the National Assembly of Venezuela, Guaidó is widely seen as the rightful leader of the country (with at least 80 per cent of Venezuelans supporting him according to recent polls), particularly in light of Maduro’s bogus election win in 2018. His public oath to serve as acting President on 23 January 2019 further solidified his position both locally and abroad.

In the midst of talk of an impending civil war, Guaidó is urging his citizens to engage in nation-wide peaceful protests to challenge Maduro’s illegitimate government. The people of Venezuela have responded. They are rising to the occasion in serried ranks, standing up for their rights and “speaking truth to power” for all to see. Despite government vehicles literally mowing people down in the open, thousands are filling the streets of Caracas in support of Guaidó, demanding free and fair elections with the leader of their choice in office.

Any hint of vacillation is all but gone.

Not only is the world listening, but also Venezuelans from all walks of life are coming together to fight for this common goal. Even members of the army and the police are beginning to defect. There is new video footage of police officers switching sides mid-protest in downtown Caracas, and long-time political prisoner Leopoldo López was recently freed by his military captors, enabling him to join his colleagues Guaidó, Machado, and others on the ground.

The Maduro regime can no longer pretend that the cracks have not formed. In a surprising deviation from chicanery, his political ally and sometimes mouthpiece, Diosdado Cabello, publically admitted that these defections are happening when he called Manuel Ricardo Cristopher Figuera’s (the head of SEBIN—the Bolivarian Intelligence Service—and the highest ranking member of the country’s security forces) break with Maduro a “betrayal.”

Increased defections began after Guaidó called for a military uprising against the Maduro government on Tuesday morning—not unlike the concept of the Egyptian officers revolt of 1952. Guaidó has been strategically working with people in the military to grant them immunity so that they can safely join his side without fearing for repercussions for their previous crimes under Maduro.

“Venezuela was born to be free, the citizens are united and determined to save our country.” – Maria Corina Machado

What began as a trickle of hope has built up to the force of a dam exploding with its river raging all over Venezuela, soon to reach its zenith. While the process is ugly and painful, it is also a testament to the beauty and the tenacity of the human spirit and its ability to act rightly no matter the cost.

Germany may have only had a handful of Bonhoeffers when they were most needed, but Venezuela is “birthing” multitudes of them each day. Maduro’s fall is imminent, the struggle against his regime ephemeral. It is only a matter of time before he is permanently ousted from office and a rightful representative of the people leads Venezuela back to its true destiny.

Evil prevails when good men do nothing, and Venezuelans from all levels of society are daily proving themselves up to the arduous task of endeavouring to “deserve” their freedom.

Maria Corina Machado recently stated, “Venezuela was born to be free, the citizens are united and determined to save our country.”

We must remember that while a life of freedom rightfully belongs to each of us, we cannot expect it to be freely given. It is through our consistent action—educating ourselves on issues and holding our rulers accountable—that we both earn and defend our freedoms.

Venezuela reminds us of the fragility of freedom and the dangers of extreme socialist ideology, but it also is an exemplar of the indomitable potential of humanity in making a better tomorrow.