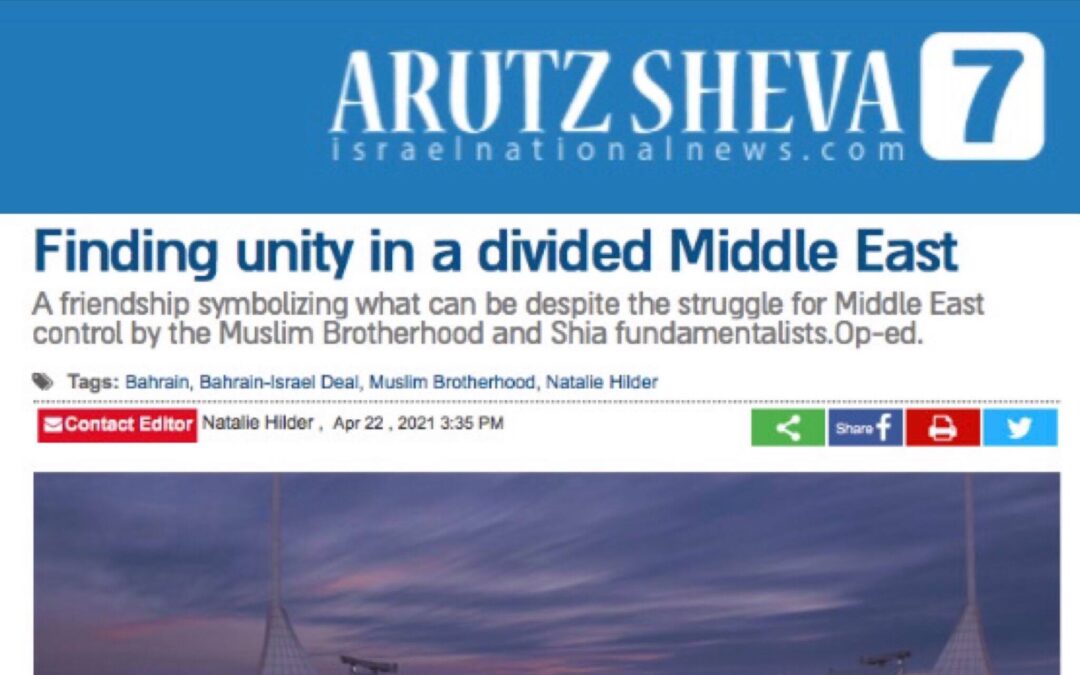 The sun was partially visible through the cloudy April sky on Koh Samui, Deen’s favourite vacation spot in the Gulf of Thailand. Opting for a coffee before his late morning ritual of driving around the small lush island, Deen pulled his rental car up to a Starbucks. The humid ocean breeze rustled the leaves of the towering palms as he stepped out of the vehicle. Pausing to take in his surroundings, he noticed an Orthodox Jewish man and his friend seated by the outdoor fountain.

In English he said, “Hello, my name is Dheya Al Deen Mohammed. I am an Arab Muslim from Bahrain. I have a question for you.”

Looking up from his conversation, Rabbi Levi Duchman greeted him and told him to continue.

“What has been the best country for Jews for the past 40 years?”

Unsure of where this conversation was going, the Rabbi suggested that it was Israel, or perhaps even America.

“No, it is the GCC—especially Bahrain—where I am from!” Deen pulled up a chair and sat down. “I will prove it to you.” He then launched into a conversation about the Jewish community’s unique status and privilege in Bahrain, and about individuals like Houda Nonoo (Bahrain’s beloved female Jewish Ambassador to the U.N.) and Rouben Dawood Rouben (the famous businessman who over several decades helped many of his countrymen in need and is referred to by locals as one of the “Sheiks of the Jewish families”).

Deen then invited Rabbi Duchman, who was studying in Morocco at the time and was already fluent in Arabic, to visit Bahrain to see it for himself.

“When I finally came and met with other young Muslims, I really felt that Jews and Muslims were coming together and that this is what tolerance and coexistence is really about.”

He liked it so much that he decided to stay, becoming the first rabbi in the gulf region to move there permanently—he was even nicknamed him “the prophet” because of his extensive knowledge and the profound way he has enriched local communities while joining the Majlis or “sitting places” where people sit to discuss ideas. While Rabbi Duchman isn’t involved in politics and prefers not to comment on the subject, he sees this as “an opportunity to re-educate and rekindle the very old and ancient relationship between the Arabs and the Jews.”

In addition to shared origins, Jewish communities coexisted (and at times flourished) in Arab lands throughout the Middle East and North Africa over millennia. The Arab-Jewish relationship is profoundly interconnected and complex. Rabbi Duchman sees current developments as a “rekindling of a connection which brings back the feeling of being home because Jews and Arabs have the same grandfather.”

The relationship between Arabs and Jews has undergone many phases with varying degrees of conflict and cooperation. Tensions were reignited during the mid-20th century—particularly surrounding the creation of the State of Israel, which Arab States opposed. Pan-Arab movements started campaigns of hate, not only against the newly created Jewish State, but also against the Jewish people living in Arab countries. This prompted a silent exodus of approximately 850 000 Jewish refugees, many of whom were expelled or forced out of Arab lands due to persecution between 1948 and 1951. More refugees continued to leave throughout the 1950s and beyond.

While similar movements existed in Bahrain, including attacks against Jewish citizens that pressured many to leave, Deen asserts that, “The Bahraini government has actually done a lot to protect the Jewish community and embraced them as true loyal Bahraini citizens, and tried its best to provide them with all the necessary protection during a very chaotic and unstable period of time in the whole Middle East.” While the line between citizens and subjects is arguably very fine and perhaps conditional, this helped facilitate an enduring Jewish presence that was able to greatly contribute to the region’s prosperity through various entrepreneurial, financial, and other endeavours.

Several Jewish families became fixtures in Bahrain and remain pillars in Bahraini society today. This included the Nonoo family, renowned for their fair business practices and for providing widespread financial exchange services at the airport—including for travellers going to Iran, Iraq, or on the Haj. Even some radicals who opposed the State of Israel chose to exchange their currency through the Nonoo family because of their reputation as the business that doesn’t cheat. The Rouben family was also highly respected in the region. Rouben Dawood Rouben was a businessman especially known for supporting those in need in the community, before he passed away in 2016. At his widely attended funeral, Rabbi Levi Duchman was shocked to see traditional Arab Muslims crying and saying how Rouben had supported them twenty, thirty, or forty years ago when some of them had had nothing, enabling them to purchase homes and start businesses, only paying him back when they could.

Deen, who also has some Jewish ancestry himself, is much less of an anomaly in the Middle East than many in the West might suppose. He says, “Changing your language or religion doesn’t change your race.” When it comes to culture and genetics, the Middle East is a melting pot. But in a place where power overrides sentiment and actions always speak louder than words, the direction of society is dictated by the strong. Yet, much like a duck treading water, circumstances may seem simple on the surface, with greater complexity just a few centimetres below. Irrespective of the multifaceted layers of individual identity, it is the reconciling of various group identities (that were/are in conflict with each other) that must be addressed to achieve peace. Rabbi Duchman believes that empowering young people and continuing to build relationships will contribute to this process. He says, “Religion isn’t here to burn bridges, but to build them.”

Whether you literally agree with Deen’s extraordinary assertion that Bahrain is the best place on earth for Jewish people to live, disagree entirely, or fall somewhere in-between, that is actually extraneous to this conversation. The point is that, regardless of the cause(s), some important strides toward furthering diplomacy and tolerance have been made in recent years—and that our job is to work to ensure that momentum isn’t lost and more importantly, that this progress is not reversed.

While we applaud the latest leaps and bounds in the right direction, the reality is that the Middle East is facing the threat of open war as well as a renaissance. Three primary movements are wrestling for control of the region: the Muslim Brotherhood—led by Turkey—seeking control of the Sunni world; the Shia fundamentalists—led by the ticking time bomb of Iran (pun intended); and the open-minded progressives (no connection to the term “progressive” as used in western politics) led by the Emirates, Israel, and now Saudi Arabia.

As much as this conflict is physical (in terms of proxy and open warfare), it is also a war of ideas where the prize is ultimately the hearts and minds of people just as much as it is about acquiring control over territory and resources. The Emirates joined with Israel to open the floodgates, unleashing a new way of thinking where many of the old reasons for historic animosity no longer make sense, especially in light of current threats and new aspirations. This is particularly true for those in the younger generation who are active on social media and are engaging with the Western world like never before. It is becoming more common to question ideas that were once ingrained, to admire reformist societies, and to aspire to achieving more freedom.

When asked why he thinks these strides did not happen sooner, Rabbi Duchman said, “This is a question we should ask ourselves everyday. We must act to make sure that our children and grandchildren won’t have the same question about something else.”

As encouraging and inspiring as these recent victories of unity are—and as tempting as it is to revel or even relax in these recent successes—now is not the time to become complacent. It would be a mistake to underestimate the challenges that await us. The Muslim Brotherhood, the Shia fundamentalists, and the progressives continue to struggle for pre-eminence in the Middle East. Let us not win battles only to lose the war. Iran and Turkey are actively opposing the progressive movement on numerous fronts while continuing to prepare their next moves. We must stay awake and do likewise.